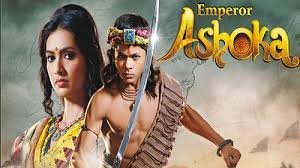 Noor is angry with Justin and threatens him, but he tries to calm her down by telling her that he loves her.

Chanakya talks to Bindusara about changing a few rules in the academy because of Sushim and Ashoka. Akramak is approached by Chanakya to be the academy’s new teacher.

Siamak and Ashoka are eager to attend Akramak’s first class. Akramak gives them a task to complete. Will they succeed at their task and impress Akramak?

Ashoka wakes up in the morning and falls off his bed and realizes that he is completely chained to his bed! Will he make it in time for class?

Sushim and Ashoka are both determined to win Emperor Maurya’s sword. Sushim keeps plotting against Ashoka and trying to prevent him from winning. Will Ashoka give up or persevere?

Bindusara arrives at the Royal Academy to explain the game rules to the students.
Monday 6 September 2021

Ashoka enters the room where Chandragupta’s sword is kept and accidentally cuts himself which gives him a feeling of being blessed by Chandragupta. Akramak enters just then and catches him, he asks Ashoka to withdraw from the games!

Ashoka meets Kasturi, who offers him some food. Kasturi discovers that Ashoka is Dharma’s son. What will she do now?

Let the games begin! The first day of the games is set to begin. Join us to see how Ashoka does.

Ashoka finds Sushim hanging from a tree. He offers help but Sushim refuses his help! Mir overhears Noor and Justin saying that they love each other. How will he react?

The competition reaches the next level but Sushim’s tricks continue as he changes Ashoka’s map. Will Ashoka find his way somehow?

We are nearing the end of the race and Sushim plans to loosen the rope so that Ashoka isn’t able to cross the river which is also filled with crocodiles!

Sushim wins the race after sabotaging Ashoka and when Ashoka confronts him, he accuses Ashoka of trying to kill him! What will Ashoka do now?

Noor watches how Justin and Agnishikha begin to get closer and wants to stop them.

Ashoka challenges Sushim to a fight and makes a deal that if he loses, he will leave the academy, but if he wins, Sushim will confess that Ashoka is innocent.

Kasturi urges Dharma to leave as Bindusara will be coming to see Ashoka. Dharma mixes a herb to help Ashoka recover faster. Will Ashoka be okay?
Monday 13 September 2021

The Academy students begin preparations for round 2 of the games. Mir is informed by the royal cook that the new cook appears to be a spy for Chanakya. Kasturi is worried when soldiers come looking for Dharma.

Join us as we watch the games today to see who makes it into the top 10. Will Ashoka make it?

Ashoka is really trying but struggles to complete his final challenge.

Ashoka does not make it into the top 10 but is still lucky enough to be chosen as the 11th student because of another student who was injured.

Dhrupad reveals Sushim’s plans to teach Ashoka a lesson, in front of Dharma. Horrified, Dharma runs out of the palace.

Dharma screams Ashoka’s name to try and save him. How will he react upon knowing that his mother is alive?

Dharma informs Chanakya that Ashoka now knows she is alive. Chanakya confronts Ashoka about his mother and tries to console him.

Bindusara takes Ashoka to the palace to eat lunch with him. Sushim is very angry when he sees this. What will he do now?

Akramak is arranging the final level of the games. He separates the students into two teams lead by Sushim and Siamak. Ashoka meets Dharma to apologize to her.

Chanakya wants to tell Bindusara that Ashoka is his son, only if Ashoka wins the sword.
Monday 20 September 2021

Ashoka and Siamak are in trouble as Sushim has stolen all their food! Meanwhile, Chanakya tells his spies to keep an eye on Varahmir.

While the students are asked to rest in their tents, Ashoka sneaks out to gather some fruit and Sushim follows him.

Ashoka applies some herbs to Siamak’s leg but Siamak requests that he continues the race without him.

Ashoka promises Siamak that he will win the sword. Sushim tells Indrajeet to sabotage Ashoka and stop him from winning!

Varahmir awakes with Chanakya in front of him and he is forced to tell the truth about Rajajiraj’s plans.

Ashoka has almost reached the sword but Sushim intercepts him and begins to fight him!

Ashoka manages to impress a tiger that is attacking Sushim, but while Ashoka is busy saving Sushim’s life, Sushim betrays him and disappears with the sword! Will Ashoka manage to catch up to him and get the sword back?

Bindusara is told that Sushim has won the sword.
Monday 27 September 2021

Ashoka tries desperately to tell Bindusara the truth but he gets cut off abruptly.

The courtroom is set for the coronation ceremony of Sushim, but before Bindusara can crown him, Chanakya bursts in with Siamak and Ashoka!

Chanakya tells Bindusara that he should wait until all his sons mature and mold themselves before he makes a decision on who should be crowned.

Ashoka overhears Dharma and Chanakya talking about his father! He confronts Chanakya to find out the truth about who his father really is. Will Chanakya tell him the truth?

Agnishikha pretends to be Noor, to find out the truth about what is going on between Noor and Justin.

Ashoka reaches the place where he was born, in search of the truth about his father. What will he find out?

Ashoka still helps the blind old lady to get home, even though she claims to not remember anything about his parents.
Premiere episodes of Emperor Ashoka air on Glow TV from Mondays to Fridays at 19h00 and 19h30 on days when there are half-hour episodes and at 19h00 on days with an hour long episodes.